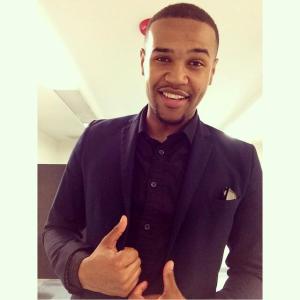 Life as a Black man in the U.S. has been a definite struggle but I would never change any part of who I am, even if it means that my life would be “easier.” Growing up in SouthEast DC, one of the poorest predominantly Black cities in the U.S. and moving to Prince George’s County, Maryland, one of the most affluent majority-Black counties in the country has come with it’s fair share of trials and tribulations. I love who I am. Where I come from. What I represent. But to some, who I am, where I come from, and what I represent does not sit well with them and they feel threatened by my mere existence. Stereotypes, judgements, perceptions. I would be a fool not acknowledge that Black men are targets for destruction in today’s society and the truth is being a black, Christian“gay” male doesn’t many things any easier for me. The intersection of these identities has presented a plethora of very unique and challenging experiences throughout my life. But I can’t help who I am or how other people judge me..and honestly, I couldn’t give a shit.

Recently, it “seems” as though more and more black males have been the victim of senseless acts of violence, racism, and discrimination but this isn’t necessarily true. It isn’t that it’s happening more often, but more often it is coming to the light of public acknowledgement. It is sad to say that this is nothing new and to some it’s the norm. But why is this the case? You would think that after slavery was abolished nearly 150 years ago, the Civil Rights Movement 50 years ago, and the election of this country’s FIRST Black president 6 years ago, that we would see progress. Indeed, some progress has been made but it has been very, very miniscule. The truth is…shit hasn’t changed.

machines. Black men are constantly demonized and criminalized. We are not provided the same opportunities as other men and when we are,

we have to fight for the leftovers.

Even after attending the University of Maryland, College Park, a mixing bowl of students of different races, ethnicities, nationalities, abilities, sexual orientations, backgrounds, lifestyles, etc. I could not forget that it is still a predominantly white institution. I truly enjoyed my experience there and the people I have met but I will never forget the subtle signs of racism, the stares when I was the only Black male in my engineering courses, the white female students who crossed the street when they saw me coming, the group of drunk white guys who didn’t think I heard them call me a nigga or a fag on the Quad. It could have been so easy for me to look down on white people as a group for the poor actions some of them have made but that wouldn’t make any sense. Just how all Black men should not be ridiculed for the poor actions that other Black have men have made (rape, murder, abuse, theft, etc.)

Last October, I joined the 2014 Teach For America DC Corps and I am currently a 1st grade teacher at Ingenuity Prep Public Charter School in SouthEast, DC. Of a staff of almost 50, I’m one of three males of color. In a field where white females are the majority and less than 2% of teachers in the U.S. are Black men, I feel even more marginalized. Black male over-representation in the U.S. prison system and under-representation in the U.S. school system has always been a painful nerve in the back of my head. But that makes my job so much more important for not only me but for my students. It’s important for my students (who are majority Black) to know that black men can be teachers. We are not all aggressive. We are not all gangbangers. We are not all drug dealers. We are not all NFL/NBA players. They all have a “choice” in what they want to be when they grow up but it will not be easy. They have to fight back. They have to advocate for themselves. But in a very proactive, productive, and non-violent way because if they choose the opposite, we will only be acting as the fools they predicted us to behave as. 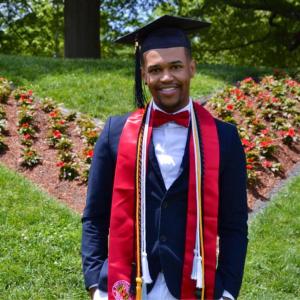 I know people didn’t expect me to make it this far. To make it past my teen years. To graduate from high school as Salutatorian. To attend a predominantly white university on a full ride and graduate on time. To start my master’s program in education at Johns Hopkins University. But that’s fine. I’m not going to stop until I get my PhD and become another black man who they address as “doctor”.

Tell me about some of your past work experience.

I got my first real taste of working in the journalism field fall semester my junior year of college when I interned for NBC Washington and worked with their web team under The Scene section. My time with NBC helped me to learn exactly what it takes to work in a newsroom environment covering local news for a major metropolitan area and it gave me insight on what goes into working as a writer for a news site, a reporter who goes out into the field and a news anchor who reports the stories that were gathered from the field. After my internship with NBC Washington, I linked up with a popular D.C. blog called “The Fab Empire,” where I served as their D.C. correspondent who covered any major entertainment and nightlife happenings in the city. With “The Fab Empire,” I was afforded the opportunity to interview several celebrities, cover red-carpet events such as The Bet Honors, and shine the spotlight on local charity events, philanthropists, and young movers and shakers in the D.C. area. After writing for “The Fab Empire” for over two years, I not only grew as a writer and improved my work portfolio, but I also gained wonderful mentors in Joi-Marie McKenzie, the blog’s creator, and Mia Fields-Hall who ran the Baltimore section of the blog. These work experiences then led me to interning with Russell Simmons site Global Grind in the summer of 2012, and then working with companies such as Black Enterprise and Cosmopolitan upon graduation in December 2012. 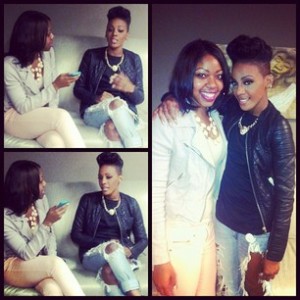 How did you find all of these great opportunities?

Working as a young journalist in this field has taught me that relationships will take you far and you can’t rely solely on your skills and past internships/work experiences to land you your next job. I’ve spent countless hours sitting behind a computer and applying to multiple jobs that I found on different job websites, but many of my journalism positions have come from a mentor or friend who told me about an opening job that was not advertised online. So with all of that said, be sure to get a mentor in whatever professional field you are interested in and be certain to maintain good relationships with peers because relationships are so important and they are a key component in growing and moving to the next level in your career. Once you land the interview for the job, be sure that you know everything there is to know about the company and if it’s for a journalism job be sure that you show off your writing clips if you’re in print or your reel if you’re in broadcast.

How did you narrow down which career you wanted to pursue?

I always knew that I wanted a career in the media field, but it wasn’t until my last semester sophomore year that I settled on

journalism. Initially going into college, I thought I wanted to major in business because it was considered safe and I knew there were a lot of professionals who worked in fields that weren’t directly related to their majors in college so I figured I’d play it safe and get a degree that could be used for anything and then somehow find my way into the media field. Towards the end of my sophomore year I met with my academic advisor to decide on my major and after talking to her about my interests, career goals and dream job as an editor she convinced me to go with my passion and major in journalism. Her exact words in that meeting were “You might as well go with your passion and be happy because no job or industry can really provide guaranteed security.”

Any tips for ladies who are looking for jobs? Do’s and Don’ts?

My tips for any young women going through the job hunting process is to first apply to the jobs that speak to your interest because your passion for a position will definitely speak through in your cover letter. Secondly, research the companies that you would like to work for and try to get the contact information for their human resources department so you can reach out to someone there and inquire about any opening positions. And lastly, throughout the whole process continue to build your network and reach out to people who have careers you admire and see if they’re open to meet for coffee to discuss how they got their job and see what career advice they have for anyone trying to break into the industry. My biggest DON’T during the whole job hunting process is to never give up. Competition is extremely tough in the job market and you may have to take an in-between job to hold you over until you land your ideal position, but in the meantime stay persistent and continue to go after the career that fulfills you.

What are your career goals in the future and how do you intend to attain them?

My future career goal is to just be recognized as a well-respected journalist who is always willing to lend a helping hand to the next generation of writers. I think it’s so important to reach back and help those coming behind you because I’ve been blessed to have people in my corner who reached back and helped push me to the next level so it’s only right that I pay it forward.

Hey followers!! The Free Your Mind Project has a new page!! I've decided to add all of my modeling work to the page! Please check it out and share! #fymproject #modeling #newpage #newyear #blog
New post up! Read about the powerful organization @farmorepreciousorg and their founder, Marline, at www.fymproject.com! #fymproject #givingback #inspiration #women #service #community #farmoreprecious #nonprofit #womenofcolor #blackwomen #selflove #empower #support #blog #newpost
Good afternoon followers! If you haven't already head over and follow @tyunscripted's page and check out her blog! For the New Year she's released her 50 favorite blogs (F.Y.M Project is honored to be included in the list!). If you're looking for new blogs and women to connect with who inspire and motivate this is the perfect list for you! #fymproject #newyear #twentiesunscripted #blog #support #empower #brownbloggers #blogger #happiness #selflove
Happy Holidays from the Free Your Mind Project! Hope everyone is enjoying this time with family whether you celebrate or not, be on the lookout for more posts today! #fymproject #holidays #givingback
Check out the first feature for #WomenGivingBack of the beautiful Tiffany Wright of @the_be_life!! Go to www.fymproject.com to read now! #fymproject #givingback #inspiration #nonprofit #communityservice #blackgirls #blackwomen #blog #newpost #thebelife #empower #selflove #support #happiness #womenofcolor