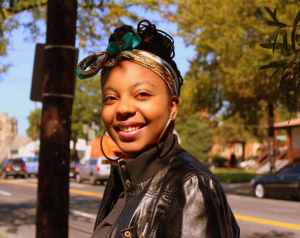 What originally drew you to writing?

I read a lot as a kid because my mother made me. Eventually it became something I enjoyed doing…Boxcar Children, Sweet Valley High, Nancy Drew, Little House on the Prairie, Goosebumps… just to name a few titles. I think I was originally drawn to writing because it was a way to tell stories without getting in trouble for lying. The first time that I remember writing a story was in third grade. I know I was coming up with stories before that because I would talk to myself a lot as a kid, and get in trouble for it. Which made me feel really embarrassed but I basically get it. When I see little kids talk to themselves it freaks me out too. But I still talk to myself a lot.

In eighth grade I tried to write my first book. There might be a copy of it somewhere. I lived in a house with a lot of kids. We would have writing competitions and everyone always liked my stories the best. Also every Monday I would come in to school with a new story from the weekend. My friends and I would sit on the windowsill and I would tell them whatever the story was. These weren’t made up stories; they were stories about what had happened to me over the weekend. Something was always happening to me over the weekend. That first book I tried to write was really bad though. I remember one of my friends telling me that.

Also in eighth grade I got in trouble for a gossip blog about my classmates. This might have been one of the most important things that happened to me in terms of writing.

My mother didn’t care about me getting in trouble for the blog. When the principal sent her what I had written alls she said was “wow, this is good.” I didn’t even know that it was. I was just bored and wanted to mess with people. Anyway my mom decided then that we should start writing a book together. I agreed because I was in eighth grade and didn’t have anything else to do. But that’s why the gossip thing was so important. Because if I hadn’t done that, my mom might not have found out I was good at writing and never would have encouraged me to pursue it. A large reason I’ve made it this far in academia is because of her encouragement.

When I got to college I started taking writing classes and that’s where I am now.

There are a lot of things I actually like a lot more than writing. I used to play the violin and the bassoon. I was okay at them but they were never the logical response to negative or exciting events in my life. Playing instruments was never the thing my gut told me to do when something happened. Music is life, I’ve heard a lot of people say that. That’s probably because they have musical talent. I wasn’t blessed with musical talent. I was blessed with writing talent. That’s just the way it is. I always wanted to sing or be really good at playing instruments. One girl I use to live with was an amazing violinist. It doesn’t matter how much I practiced, I could never be as good as she was. It came naturally to her. Writing comes naturally to me.

Anything you’re working on now?

My mother and I wrote a book together called “Freshman Year: Bullies Beware!”. That book is not based on my life, which a lot of people ask me, but it is based on a lot of stuff that I saw happen or was told about happening at private schools in the DC area. I wasn’t bullied by kids in the private school system. Not in the outright way that some people I’ve known have been. In fact, I was actually called a bully on a couple occasions, the gossip blog and when I made the dean of students cry in front of the entire school (which landed me a four day suspension).

But, I was bullied by the faculty a lot. I see now that they probably thought they were doing me a favor. Letting me know my place as a poor black girl in the world. However, that failed.

But we didn’t write about my experience being bullied because it’s a much heavier issue to talk about a child being bullied by adults. And it’s also less common in this context. It was a very particular case. For me to write about it as fiction would be pointless. Anyone who was at my school would know it was a real situation; but I would actually want people to know that because those people really tried to f*** with me. But it’s a different story for a different time…

Anyway, in the book, the Tiara Johnson character is much more wholesome than I am. I think people will really like her a lot. She’s smart, athletic, level headed and I intentionally made her this way. She’s the type of person anyone would want to be friends with, however, racism is a main issue she encounters. Also her family is wealthy, another intentional characteristic, because it shows that it doesn’t matter what your background is, if someone is racist, their perverted concept of blackness is all that they care about and all that they see when they look at you. I wanted to write a story that showcases how even in “privileged” environments, many still struggle with unfairness and judgement.

Can you talk about the process for publishing your book?

We knew we wanted to publish independently for a lot of reasons. For one thing, we need the money. My mother has two kids in college. Funds are tight. We didn’t have space to be giving money to publishing companies for doing the advertising work for us. This is ten years of work. We didn’t do all of that to only walk away with 20% or whatever it would be.

Also we wanted to be honest and a lot of publishing companies have been known to mess with black characters and change who they are. Make them more “urban” or stereotypical. I used to do interviews for the Amsterdam News and a lot of authors told me about their experiences with this and it’s really horrible. It wasn’t worth our time to explain to anyone who didn’t already get it, that wealthy black girls exist. I’m not one of them but I went to private school and I’ve studied briefly at Howard and I know that they’re there. There are even a good handful at BU.

My mom had been contacted years back by an Englishman who was really interested in another book she’s written, for adults. He was pressuring her to sell the story so hard that she was like, “this must be better than I thought.” So she did all the research for independent avenues.

A lot of people think that if something is published independently it might not be as good as things published through established companies. That’s not necessarily true. The piece is edited by professionals. We paid for that service. The difference between independent publishing and going with a company is the risk. If we don’t sell a certain number of copies, we don’t make any money and that’s on us. With a publishing company you get paid upfront and you sell your work to them. You no longer own it. But the thing about that is you know the company will push the text for you, because they’ve invested in it. Well most of the time. With self-publishing, you have to push the text yourself. Which means you have to make people believe in you. That is a lot of work, but we’re hoping to do it right. My mother and I know a lot of people who believe in us. We wouldn’t have taken this risk if we didn’t.

What would you like to do in the future with your writing?

I have a lot of things on my computer that are finished and ready to go. So does my mother. There are a lot of reasons why we had to wait so long to publish. Family things. But over that period of time we were still working. My mom has about six books completed. I have three.

“Freshman Year…” Is part of a series. We’re working on the second book now. I really love it and I’m having a lot of fun with the characters.

There is something we’re working on that I can’t really discuss yet but it will open the door for other writers of color, which is one of our goals. There’s nothing wrong with Urban Lit (Hood lit, hood erotica, etc) and I really mean NOTHING is wrong with it. But there have to be platforms for black writers who are writing other things. And it has to be consistent. Not just one person of color a year in some mainstream publication. We’re trying to make a new space for that.

Want to see more of Kesia? Check her out on these other sites:

One thought on ““Creating New Spaces””

Hey followers!! The Free Your Mind Project has a new page!! I've decided to add all of my modeling work to the page! Please check it out and share! #fymproject #modeling #newpage #newyear #blog
New post up! Read about the powerful organization @farmorepreciousorg and their founder, Marline, at www.fymproject.com! #fymproject #givingback #inspiration #women #service #community #farmoreprecious #nonprofit #womenofcolor #blackwomen #selflove #empower #support #blog #newpost
Good afternoon followers! If you haven't already head over and follow @tyunscripted's page and check out her blog! For the New Year she's released her 50 favorite blogs (F.Y.M Project is honored to be included in the list!). If you're looking for new blogs and women to connect with who inspire and motivate this is the perfect list for you! #fymproject #newyear #twentiesunscripted #blog #support #empower #brownbloggers #blogger #happiness #selflove
Happy Holidays from the Free Your Mind Project! Hope everyone is enjoying this time with family whether you celebrate or not, be on the lookout for more posts today! #fymproject #holidays #givingback
Check out the first feature for #WomenGivingBack of the beautiful Tiffany Wright of @the_be_life!! Go to www.fymproject.com to read now! #fymproject #givingback #inspiration #nonprofit #communityservice #blackgirls #blackwomen #blog #newpost #thebelife #empower #selflove #support #happiness #womenofcolor
%d bloggers like this: